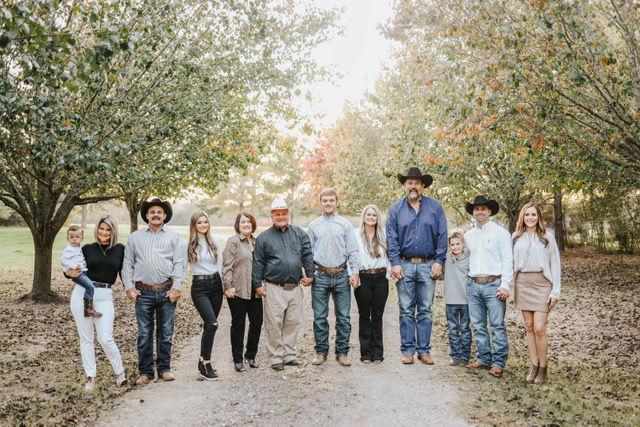 The year was 1969 and I was a 15 year old high school sophomore at Ross Sterling High School in Houston, Texas. It was my first year to be in FFA and I was as excited and happy as a 15 year old can be. You see, we lived in the city in a residential neighborhood and owning livestock and raising them was something I always wanted to do but was never feasible.

My Dad, Harold, was a petroleum engineer and he has never owned or raised beef cattle for himself. But my grandfather, Louis Urbanosky had a herd of mainly Polled Herefords and some commercial cows at his farm in Caldwell, Texas. Growing up, I spent a lot of my time at the farm in Caldwell. I loved being around the cows; watching them, feeding them and just tending to them. I would even play cow and lick the salt blocks with them. It was obvious, I loved cows.

Now back to 1969, I had a Hereford steer my first year in Ag. and did really well with him; so my Ag Teacher, John Parker, chose me to be in the calf scramble at the Houston Livestock Show and Rodeo in the new Astrodome. I was determined I would catch a calf, absolutely nothing could have stopped me and sure enough, I was the first person to catch a calf and drag him across the line. I was awarded a $200.00 scramble certificate to buy a show heifer.

I had always been around Hereford cattle and my first steer was a Hereford, but I really never considered getting a Hereford. My Ag Teacher, was an Angus man and he encouraged me to get an Angus. Charolais cattle were making a real surge in popularity and I thought about them. On the way to Caldwell from Houston we would always pass by the Nine Bar Ranch in Cypress. I always looked forward to passing by the ranch and seeing the Santa Gertrudis. Everything about them was better and I knew if there was any way; I was going to get a Santa Gertrudis, they were ‘the ultimate’. 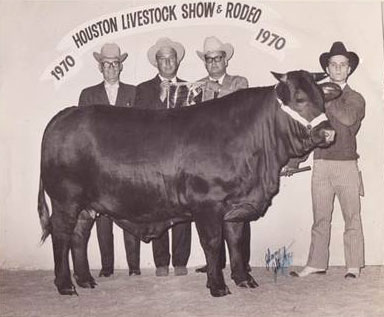 Luckily for me, my uncle, Alton Novosad, was the long time ranch manager at R.E. “ Bob” Smith Ranch in Richmond, Texas. I told him I wanted a Santa Gertrudis heifer and he told me about this new ranch near Houston owned by Superior Oil Co. called Ganado Rojo, which means red cattle in Spanish. My Ag.Teacher, my Dad and I went to Alief, TX. (now an urban area inside Houston). Mr. Hank Grant was the ranch manager and he took us to a pasture with about 30 yearling heifers in it. All of the heifers looked the same to me; big, red, beautiful and perfect. After about an hour and a half, Mr. Parker and Hank Grant chose 7024 for me. I named her Alice. They sold her to me for $350.00. My scramble certificate plus $150.00. That had to be less than she was worth, but I was just glad my Dad loaned me the extra money and Alice was my girl. I remember when we picked her up, she weighed 935 lbs. She was a big, stout yearling heifer 14 months old. I took her to our FFA Ag Facilities and the halter breaking was about to begin. The steer I had halter broke weighed about 550 lbs and this was going to be a lot tougher. She was big, strong and tough but I was pretty tough also when I was 15. It was a love affair from the start. I spent every bit of time I could with her. I loved her and she loved me. By late summer, I took Alice to her first show in Crosby, TX. Alice took on a couple of Santa Gertrudis and was easily named champion then she took on all other breed champions and easily defeated them to be named Grand Champions. Next was Memorial City Fair, then Northline Fair and several other shows. This was before TJLA and the extensive opportunity kids have to show heifers in the current era. The result was always the same; Alice beat everybody and people hated to see me and the big Santa Gertrudis show-up because they knew they could never beat her. The Houston Livestock Show came in 1970 and we were now in big time. I was confident that Alice was the greatest heifer in the world; after all, she had never been beaten. Well, Alice beat everyone and left no doubt in 1970 that she was unbeatable. She won the Santa Getrudis Scramble Division then beat all of the other breed champions to become the Grand Champion Scramble Heifer., this was a first for Santa Gertrudis at the Houston Livestock Show. Then Alice won the Santa Gertrudis Junior Show. At 2 years old and weighing 1,550 lbs. she was unbeatable.

Those events were pivotal in my life. I felt like Alice and I were special and together, we would continue to make history.
Alice had a heifer calf in August by the great Tarzan 460 bull and I named her Monty. I had one year left to show a heifer. Alice was too old now and Monty was too young to show.

I wanted to get my next show heifer from Mirasol Ranch in Uvalde, TX. They were the breeders of Masterpiece 511 and Masterpiece Jr. 997. When we arrived at the ranch, Arturo Alonzo, the ranch manager, showed us some penned yearling heifers. They were not what we were looking for. They weren’t anywhere near as good as Alice was at that age and at $1,000 each, we asked about heifer calves on their mothers. Arturo took us from pasture to pasture, cows and calves in mesquite, brush and grass. Late in the afternoon, we saw a Wagon Wheel Ranch bred cow with a Masterpiece 997 heifer calf born in late March, still nursing and very young. But she was special and everybody agreed she was our choice, her name was Miss Masterpiece 621. Arturo said that we had to go talk to Mr. C.A. McDaniel, the owner of Mirasol Ranch to see if he would agree to sell her. We went to his home, there on the ranch and much like a young man, meeting his girlfriends father for the first time, we had a long getting to know you visit. I told him how much I had won with Alice and wanted this special little heifer he had, so I could do it again. Mr. McDaniel sold me Miss Masterpiece 621 for $500.00 and we had to come back in the fall to pick her up. 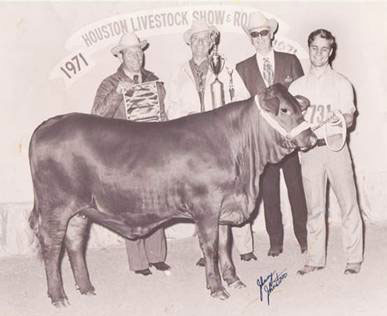 We picked-up Miss Masterpiece 621 in September and I had to halter break her and get her ready to compete in Houston in a few months. Everything went well and at 11 months old the Houston Livestock Show of 1971 would be the first show for Miss Masterpiece 621. Well my Ag Teacher, told me not to expect to win because 11 month old heifers were generally too young to beat the more mature heifers. Miss Masterpiece 621 was one of the youngest heifers but still won her class then shocked everybody by beating them all and being named Grand Champion of the 1971 Houston Livestock Junior Santa Gertrudis Show.

My parents moved us to Pearland and I now had 36 acres to build my Santa Gertrudis empire. I kept my beloved Alice and Miss Masterpiece and had them their whole lives producing the backbone of our current herd. I have always tried to use the best bulls we could raise or buy. I bought the Superior 1-1500 bull in 1979 for $10,000 at the Tri Star Sale and he improved the quality and reputation of our herd greatly.

We produced an embryo son of L& L 300-1 bred to a Moses 6-6 daughter, Urbanosky T6-22 was the main herd bull we used for many years to create the Urbanosky polled cattle that have been so successful in the show and sale-ring.

Jane and I got married in 1976 and she always tolerated my passion for Santa Gertrudis.
In 1985, we bought more land and moved our family to Plantersville where we currently live and ranch.

We currently have over 200 Santa Gertrudis cows and are dedicated to produce the best ones possible.

Currently, we are blessed with two great herd sires Hellacious and Bulletproof. Both of these home raised bulls we feel are destined to improve the Santa Gertrudis breed now and in the decades to come. God has blessed us and we thank him.